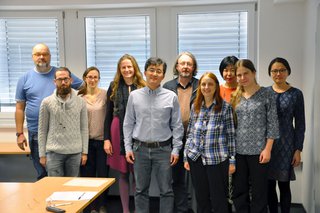 The BuddhistRoad team invited the Chinese researcher Hou Haoran from Leipzig University to present his research on the religious aspects of the Tangut Empire in a guest lecture. As visiting researcher he introduced the team and further researchers from CERES to the Buddhist fire offerings (homa), which were widely practiced in Tangut Empire during the 12th to 13th century. This aspect of Tantric practices is described widely in manuscripts in Chinese and Tangut from Karakhoto and Shanzuigou. Several scriptures can be understood as manuals for the homa ritual, while other sources from that era and Buddhist prayers specify the homa offerings that were performed at the Tangut court.

In his overview Hou Haoran also took into account visual materials related to the ritual: Both the Thangka collections from Karakhoto as well as the mural paintings of the caves in Yulin depict homa elements. Another example for the visual expression is a Tangut blockprint, i.e., the Saṃpuṭatantra, that includes a section homavidhi introducing various formulas of homa ritual. Hou Haoran emphasised that the rare text was written in the three languages of Sanskrit, Tibetan, and Tangut. Using an approach from the comparative study, he demonstrated on the basis of this trilingual source how Tangut people interpreted and used Buddhist texts, images, and rituals.