The concept of the Silk Road suggests a chronotope of cultural contact, flows of ideas and religions, trade and economic interests at the interstices of empires, from the ancient Roman and Chinese, to the modern “Great Game” between Russia and the British empire.

In post-WWII Japan, the idea of the Silk Road was associated in the media, art, and literature with freedom of travel, contact with exotic cultures, and spiritual encounters. The image of Japan as the end point of the route and the repository of the rich entanglement of cultures that flowed through the Eurasian continent made it possible to conceive a new role for the country after the war: Japan as a model of cultural heritage preservation and a promoter of peace and international collaboration. Religion and spirituality play an essential role in such image, especially in the case of Buddhism, whose spread from India to East Asia followed the maritime and land routes of the Silk Road. In this lecture, the lecture will particularly analyze how such images of the Silk Road and of Buddhism intersected in the art and cultural heritage activism of Hirayama Ikuo, one of the major post-war nihonga painters in Japan and a survivor of the Hiroshima nuclear bombing, and how they became part of religious practice and imagery at the Yakushiji temple, in Nara. The lecture will take into consideration material and economic aspects of this imaginaire, and what is left unsaid in the discourse around it, such as Buddhist involvement in Japanese wartime militarism. 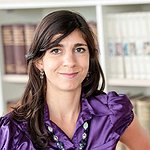